Forum rules
Please remember to respect the copyright of the author. Please do not post content from this section elsewhere without the specific permission of the author.
Post Reply
120 posts
Message
Author

On my recent trip to Comines I think it would be fair to say that I was deeply moved. I think what moved me most of all was the fact that the five graves were so beautifully cared for, and that so many French people turned out to honour five fallen British soldiers. When I got back I wrote in the Xbox thread..


As I was watching the acts of remembrance in Comines I started to wonder, and not for the first time, how long this communal act of remembrance would continue. It was nice to see the school children taking part with their parents and as a school ...

A little while ago I discovered that we have a CWWGC headstone in our village church yard contrast the two sites.

All Saints Church Barton Stacey this morning.. (incidentally the new little cross of rememberance appeared just this week after I started my inquiries.)

Last week I don’t know why but I began to feel a little ashamed that I had done nothing about the sorry state of L/CPL Smith’s grave. So I went to see the Vicar, he is an ex Soldier. He was completely unaware of the grave I had to show him its location. He didn’t seem terribly concerned about its sorry state. Since then I have spoken with many people in the Village Not one single person knew about it. We only have one local family with the name of Smith and Walter Herbert Smith is not a relative. Yesterday I decided that it was time I did something about the condition of the Grave. First of all I did a search of the CWWGC roll of honour My smith can’t be found.I then spoke to the Hampshire Regimental Museum, they were quite helpful. I would like to put some edging stones around the grave and infill it with some chippings to match the Portland stone headstone. This morning I have spoken to the chairman of Parochial Parish Council He is going to put my proposal to the councilwhen they next meet in January. I have decided that if no money is forthcoming I will raise it. Hopefully the British Legion and the Hampshire Regimental Association might be prepared to contribute.

This is what I have learn't so far..


* Why not recorded as either France/Flanders/ Western Front. Enquires ongoing.

Well done Jenks!
Without being sentimental - Nice to know that someone cares. You reap what you sow!
Top

I'll second that Geordie bloke. Full marks Jenks, and if you end up raising it yourself I'd be more than happy to chuck in a few quid.
One of the things that impressed me most when I spent a few weeks in France for the first time a few years ago (I've led a very sheltered life... :lol: ) was the way they treat their veterans and fallen, it really couldn't be more different here.
Top

Doz wrote: One of the things that impressed me most when I spent a few weeks in France for the first time a few years ago was the way they treat their veterans and fallen, it really couldn't be more different here.


In what regard?
In 1978 I was told by my grand dad that the secret to rifle accuracy is, a quality bullet, fired down a quality barrel..... How has that changed?

Jenks, if it comes down to raising the money yourself I'd be happy to contribute as well. You may be a grumpy old bugger but you're a good man old son.

Used the advanced search http://www.cwgc.org/find-war-dead.aspx?cpage=1 and just put in Barton Stacey and you will find both him and a Serjeant Hillier (d Mar 1919) listed.

Have you found the second grave?


We have two in our local Churchyard, and whenever I walk past I will acknowledge one of them - I have yet to see the second (d Oct. 1919).

I always wonder what the cut of date is for dying from wounds? 1 year, 2 years, 10 years?

Wow! well done thank you. blowed if i know why I couldn't find him. I typed in his name regiment, his Regimental number date of death...No result. Nor was I aware of the other grave. I'm off out now to see if I can find him. This could get expensive.

I will be happy to make a small monetary contribution.

I will also contribute 5 x times that amount for Help for Hero's to support our current serviceman and woman sacrificing life and limb for our liberties!

"Lest we forget - we stand on the shoulders of several truly great generations"
European 2012 FTR Champion (November 2012 I had +- 112 very lucky shots in a row)
“F-Open shooters are compensating for something”
I make an awesome friend and even worse enemy.
Top

Back when I lived just oop from the River Tweed I used to walk across into En-ger-Land to get the bus into the shee-ite-hole a.k.a. Berwick upon Tweed.

Passed a couple of graves...almost fell over with shock, a CWGC grave - for Daniel Laidlaw, V.C. "The Piper of Loos" 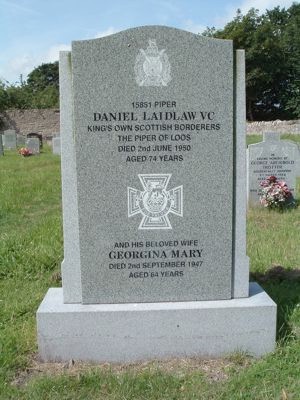 As an aside, my uncle recently discovered that the flag-pole in his churchyard had been erected in memory of a soldier from the parish who was killed in WW2. He informed the vicar, who checked parish records. As a result the flag-pole was fully restored and a plaque added to mark it as an official war grave site/plot

I'd put pressure on the local parish to have the 2 headstones cleaned, etc.
I'd also contact the local press & the local junior schools - as they learn about such things as part of the history course now & the school may well adopt the graves as part of their curriculum

I too will be glad, no, honoured to participate in raising funds.
Paul-Andrzej

I'm not happy, but I'm not unhappy about it. Alan Bennett.
Top
Post Reply
120 posts